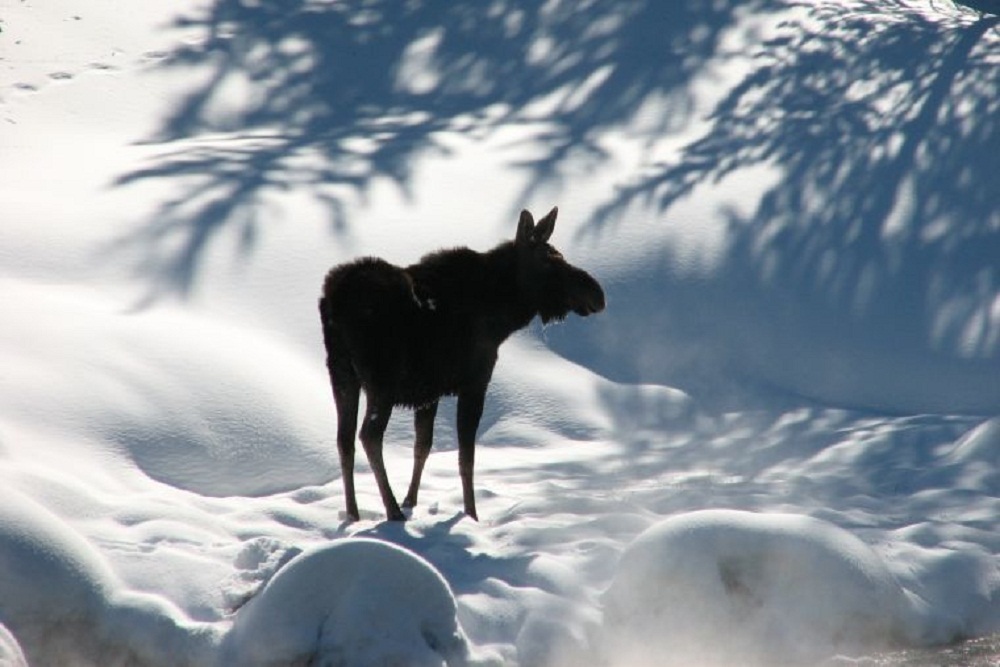 New York State Department of Environmental Conservation (DEC) Commissioner Basil Seggos today announced the completion of an aerial Adirondack moose survey that takes place each year as part of a collaborative study of the health of New York's moose population. A total of 83 groups of one or more moose were observed during the survey's 175 sightings, with all appearing healthy.

"Moose are a charismatic and iconic animal here in New York and important research like the aerial survey is key to maintaining a strong population," DEC Commissioner Basil Seggos said. "I applaud the work of DEC's expert wildlife staff and our many partners as we work together to keep a close eye on New York's moose."

After an absence of 120 years, moose recolonized New York in the 1980s. Since that time, biologists have been routinely monitoring moose in the state, informing the public about moose, and responding to situations where moose come into conflict with people.

DEC wildlife staff conducted the helicopter flights in January over seven days and approximately 42 hours of flight time. The survey divides the Adirondack park into grids and records every moose or group of moose seen. The survey crew then flies over to the sighting location, takes a GPS point, determines the number of animals, the age and sex of each animal, and notes general habitat characteristics for each moose sighted.

Researchers will use the data from the 2019 survey to refine DEC's estimate of the Adirondack moose population, which most recently numbered approximately 400 animals. In addition to estimating moose population size, scientists involved in this collaborative study also aim to improve the understanding of moose survival and reproductive rates and to assess moose diet and health. This information is important to reduce human-moose conflicts and to properly manage moose populations in New York State.

Outside of New York, moose mortality has been linked to a parasite known as the winter tick (Dermacentor albipictus). High tick loads on moose can lead to fewer calves being born as well as poor condition from blood loss that can lead to death. While a few moose with winter ticks have been documented in New York in the past, there was no evidence of winter tick infestation noted in 2019's survey.

Currently there are six moose in New York that carry GPS collars, which allow biologists to track their movements and determine the number of calves that are born to adult females. Adult female moose usually have one or two calves in late May or early June every other year. In past aerial surveys, biologists have seen a ratio of approximately 0.5 calves per cow. This year, the calf-to-cow ratio was approximately 0.37 calves per cow, and no twin calves were observed during the survey.

In New York, most moose are located in the Adirondack Mountains and the Taconic Highlands along the Massachusetts and Vermont borders, though young male moose occasionally will wander south of the Adirondacks in search of suitable areas to establish a home range. Moose are primarily browsers, feeding on the leaves, twigs, and buds of hardwood and softwood trees and shrubs. An adult moose eats 40 to 60 pounds of browse every day.

The mid-winter survey is in the fifth year of a multi-year partnership with researchers from the SUNY College of Environmental Science and Forestry (SUNY-ESF), Cornell University's Cooperative Fish and Wildlife Research Unit and Animal Health Diagnostic Center, the Biodiversity Research Institute, and the Wildlife Conservation Society.

DEC and its research partners are also seeking information from the public regarding moose sightings to provide data for this study. If a moose is seen, the public can fill out this online form.