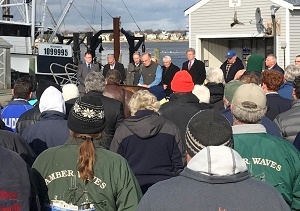 The rally was in response to December votes by Atlantic States Marine Fisheries Commission and the Mid-Atlantic Fishery Management Council that could lead to an increase in the minimum size of summer flounder that anglers can keep, decrease the daily limit and shorten the length of the season, the release said.

An option that is being weighed seeks to reduce the state’s recreational harvest limit for summer flounder, the state’s most popular game fish, by about 50 percent.

“Such a draconian reduction in the recreational harvest limit would be tantamount to a moratorium on one of the most popular fish sought after by recreational anglers in New Jersey, making it nearly impossible for them to keep any of the flounder they catch,” Martin said at the rally, according to the release.

“This will cripple marinas, charter boat operators and owners of bait-and-tackle shops, and would have severe consequences on the hotels, restaurants and other tourism-related businesses that support anglers and their families,” Martin said.