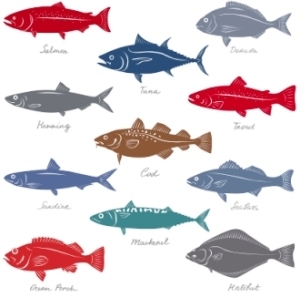 Consumers can make better decisions about fish consumption with a chart released jointly from the U.S. Environmental Protection Agency and U.S. Food and Drug Administration (FDA).

Using the infographic, women of childbearing age who are currently pregnant or breastfeeding, as well as those who are planning families, now can make better-informed choices when shopping for fish that is considered healthy, the EPA said in a recent news release.

Because all fish contain trace amounts of mercury, known to harm the brain and nervous system if too much is ingested over time, the infographic organizes seafood into three categories: best choices, good choices and fish to avoid, the release said. The EPA said the top tier already accounts for close to 90 percent of fish consumed nationwide.

Having discovered that half of pregnant women eat less than the recommended amount (2 ounces) weekly, the FDA joined the EPA to publicize the benefits of seafood consumption, with both agencies recommending 8 to 12 ounces a week of low-mercury fish, such as shrimp, pollock, salmon, canned light tuna, tilapia, catfish and cod.

“Fish are an important source of protein and other nutrients for young children and women who are or may become pregnant, or are breastfeeding," FDA Deputy Commissioner for Foods and Veterinary Medicine Stephen Ostroff said in the release. "This advice clearly shows the great diversity of fish in the U.S. market that they can consume safely.”

All seafood vendors including retailers and grocers are strongly encouraged to post the new advice prominently in their place of business, the release said. Those who fish recreationally are also advised to consult the new chart to determine safety.

To view the chart, go to: http://www.fda.gov/Food/FoodborneIllnessContaminants/Metals/ucm393070.htm.