Pruitt, as EPA boss, will stay within the law: consultant 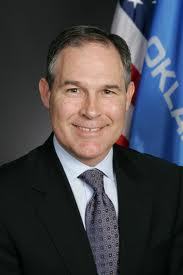 Pruitt
Despite concerns in some quarters that Scott Pruitt, if confirmed to lead the EPA, will dismantle many of the country’s environmental protections, the nominee is a person with a deep respect for the law, according to those who know the Oklahoma attorney general.

Pruitt’s nomination has provoked disquiet among some, particularly on the left, with concerns that he will have a free hand to take a wrecking ball to the agency.

His pivotal role in leading the legal challenge against the EPA-authored Clean Power Plan is cited as a vital concern.

But that fails to take into account a key element of Pruitt’s character, Mike McKenna, who has followed the Trump energy team transition both from the inside and out since even before the November election, said.

“Pruitt is very much a lawyer,” McKenna told EP News Wire. “That’s part of the problem with folks on the Republican side – they will respect and enforce the laws.”

McKenna, who heads MWR Strategies, an energy consultancy and lobbying form, was handpicked by Donald Trump to handle the transition in his area of expertise.

But he stepped down after it was announced that members of the “agency landing teams” would have to de-register as lobbyists.

McKenna expresses some admiration for the Obama administration and its use of the EPA. It was aggressive, whether you agreed or disagreed with them, he said.

But Pruitt almost certainly will argue that the EPA and President Barack Obama went far beyond what regulatory muscle is allowed within the law.

And the Clean Power Plan is likely done, but more because arguments as to whether the EPA exceeded its powers will be heard by the U.S. Supreme Court, McKenna said.

Pruitt, along with 26 other state attorneys general, led the challenge against the Clean Power Plan, arguing the EPA was exceeding its authority under the Clean Air Act.

But many states are already implementing the plan, and 18, as well as Washington, D.C, defended the EPA against the challenge.

Its implementation in all states was delayed after the Supreme Court ordered a stay ahead of a hearing and judgment by the U.S. Court of Appeals for the District of Columbia Circuit. A hearing was heard in September and a judgment is likely to be delivered early this year.

In a piece that was published in The Hill, which was jointly authored with the executive vice president of the Oklahoma Council of Public Affairs, Pruitt laid his objections.

Oklahoma and other states have managed their retail electricity markets in such a way that has provided affordable, reliable energy to their citizens for nearly a century, the authors wrote.

“States' individual departments of environmental quality have protected the well-being of their state's air quality and the health of their citizens. It is an insult that this administration assumes that the EPA knows better than state regulators close to home,” the article said.