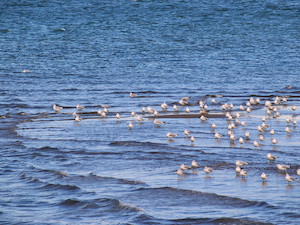 New York's’ Hobart and William Smith Colleges won the largest grant, of $516,000, for a project entitled “Water Chestnut Control in New York’s Great Lakes Basin.” One hundred students and 30 members of the local community will take part in the project, though its reach is projected to be approximately 10,000 community members. The colleges intend to use hand pulling, mechanical harvest and chemical treatment to remove water chestnut from the Lake Ontario and Lake Erie basins.

Finally, the New York State Office of Parks won a $500,000 grant for its “Using Boat Stewards to Prevent the Spread of Aquatic Invasive Species” project, which hopes to expand on an already successful watercraft inspection stewardship program.

"Invasive species is a serious problem facing the Great Lakes," EPA Regional Administrator Judith A. Enck said. "These EPA grants will help prevent larger costs and damage to the environment in the future and will educate students and boaters about what they can do to reduce this threat to the Great Lakes."