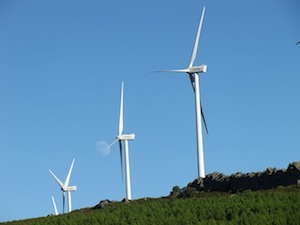 Iowa Gov. Terry Branstad and Lt. Gov. Kim Reynolds recently celebrated Iowa’s distinction as the first and only state to generate more than 30 percent of its energy from wind, according to the U.S. Energy Information Administration.

“We are proud of Iowa’s leadership in wind energy,” Branstad, who chairs the Governors’ Wind and Solar Energy Coalition, said. “With potential to jump above 40 percent in the next five years, we are committed to building an even greener Iowa future that will provide our Iowa families with cleaner, renewable energy and job opportunities.”

The Iowan economy has received an $11.8 billion boost due to the wind farming industry, and projections from the American Wind Energy Association, which used data from the Department of Energy, suggests that the state could generate enough wind power to supply the annual usage of 6.3 million homes within five years.

“As chair of the Iowa Energy Plan, I’ve heard first-hand from existing and prospective companies how important it is to have clean, renewable and reliable sources of energy like wind,” Reynolds said. “The data released last week shows how committed Iowa is to promoting an environment for companies to grow and innovate. But we are not done yet and believe that Iowa is on the forefront of an even greater renewable future for our state.”

Office of the Governor of Iowa Terry Branstad