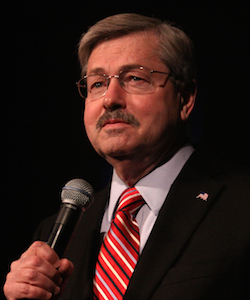 “Gov. Branstad, you have been one of the most passionate, articulate, and effective advocates for value-added agriculture, farmers, and ethanol,” Absolute Energy President Rick Schwarck, who presented the award, said. “You have fought in our state to build and maintain the nation’s largest and most competitive ethanol industry. You have fought the U.S. Environmental Protection Agency as it has tried to undermine the effectiveness of renewable fuels programs. And you have made ethanol a defining issue in Iowa and across the country in this year’s presidential campaign.”

The RFA’s recognition of Branstad comes in his sixth non-consecutive term and is a sign of the work he has been doing throughout his time in office, which began in 1983. The Industry Award is an annual recognition of innovative and dedicated figures in the renewable energy sector.

“Gov. Branstad was a founding member of the Governors’ Ethanol Coalition, and throughout his career he has worked tirelessly on behalf of our nation’s ethanol producers and farmers,” RFA President and CEO Bob Dinneen said. “I can think of no better recipient for this year’s RFA Industry Award. The people of Iowa are lucky to have a man of such vision and character leading their state."