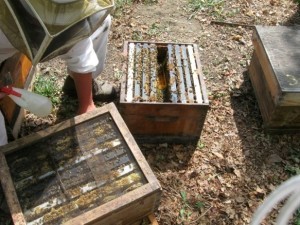 A beekeeper at work
Bayer and a leading nonprofit dedicated to pollination research have joined forces in a $1 million multi-year research project aimed at improving the health of honey bees.

The crop science giant is offering research grants over the five-year life of the program, to be administered by California-based Project Apis m.

Following consultation with beekeepers and other experts, as well as agricultural interests, Bayer’s Health Hives 2020 initiative identified the areas where the company believes the most urgent research is needed.

“This is a a program that we decided to do long term, or at least medium term, to see what kind of research is needed to improve the health of the honey bee by 2020,” David Fischer, Bayer’s Pollinator Safety Group director, told EP Newswire.

Bayer organized workshops, and brought together some 20 experts in honey bee research, agriculture and beekeepers to pinpoint the research gaps and where are the opportunities to make a difference, Fischer said.

Varroa mites, which made their way from Asia to the Americas in the 1980s, will be the focus of some research. An infestation of mites in hives can be devastating to a colony.

“Commercial beekeepers are holding their own over the last 10 years, Fischer said. "Beekeepers are saying you can maintain the same number of colonies, but it’s twice as hard work these days."

Research into the possible effect of insecticides on the honey bee population will not be funded under the initiative, Fischer said.

“We are not going to do that in this initiative,” he said.

The U.S. Environmental Protection Agency (EPA) on Jan. 6 announced a preliminary pollinator risk assessment for the neonicotinoid insecticide, imidacloprid. It concluded there was a threat to some pollinators. Bayer is the primary manufacturer of imidacloprid globally.

Fischer said the EPA report stated there was a potential but minimal risk with three use patterns relating to two crops, cotton and citrus.

“The overall reasons for bee health not being as good as we would like it to be has nothing to do with neoconontids,” Fischer said.

“While the overall number of honey bee colonies continues to increase, they are still being impacted by a wide range of health-related issues,” Christi Heintz, Project Apis m executive director, said.  “In issuing a request for proposals, our goal is to identify scientists and promising research initiatives that can help solve some of the most critical concerns facing beekeepers today.”

Proposals should address one or more of the key focus areas, and include qualifications of the research team, proposed timelines, deliverables and budget.

According to Heintz, the intent is to conduct multi-year investigations with annual reports on progress toward achieving project goals.