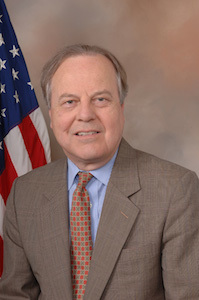 Rep. Ed Whitfield (R-KY)
The Energy and Power Subcommittee recently advanced 12 bills, aimed at modernizing the country’s energy infrastructure and blocking some energy regulations, to the full Energy and Commerce Committee for approval.

“All 12 bills are a plus for jobs, for domestic energy security, and for consumers,” U.S. Rep. Fred Upton (R-MI), chair of the Energy and Commerce Committee, said. “The benefits of domestic energy production and delivery are something we should all be able to agree on.”

The advanced legislation included five bills to extend commencement deadlines for hydroelectric projects for Clark Canyon Dam, the Gibson Dam, the W. Kerr Scott Dam, the Jennings Randolph Dam and the Cannonsville Dam. Two of the bills advanced would amend the Federal Power Act, with H.R. 2984 allowing for rehearing of orders affecting rates, and H.R. 4427 creating a minimum monetary threshold of $10 million for Federal Energy Regulatory Commission jurisdiction facilities. H.R. 3797, the Satisfying Energy Needs and Saving the Environment (SENSE) Act and H.R.___ the Blocking Regulatory Interference from Closing Kilns (BRICK) Act, seek to lessen the impact of environmental regulations, and H.R. 3021 the AIR Survey Act of 2015, seeks to allow aerial survey data to be used in federal review of natural gas pipelines. H.R. 4444 would exempt some lighting technologies from the Department of Energy’s external power supplies efficiency standards, and H.R. 4238 would update language relating to minorities in the Department of Energy Organization Act and the Local Public Works Capital Development and Investment Act of 1976.

“Each of these bills may be considered small standing alone but together they represent an important step in the direction of a more sensible energy policy and a brighter economic future for this nation,” U.S. Rep. Ed Whitfield (R-KY), said.