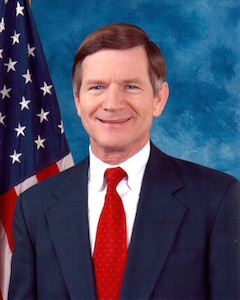 Rep. Lamar Smith (R-TX)
The House Science, Space and Technology Committee held a hearing recently to discuss “midnight regulations,” or regulations made at the end of a presidential administration, from the Department of Energy (DOE) and Environmental Protection Agency (EPA).

“Despite heavy and growing public opposition, the Obama administration is actively willing to commit the U.S. to costly new regulations that will do nothing to improve the environment but will negatively impact economic growth,” U.S. Rep. Lamar Smith (R-TX), who chairs the committee said. "Now the President plans to rush through even more regulations. The DOE now works to issue costly energy efficiency rules on everything from household appliances to vending machines, including ceiling fans, air conditioning and heating equipment, and residential boilers.”

The hearing specifically touched on some of the EPA’s 2015 regulations, including the Waters of the United States rule, the Clean Power Plan and revisions to the Ozone National Ambient Air Quality Standards, as well as new energy efficiency standards from the DOE.

“These proposed regulations will have an even greater adverse impact on those who live on fixed incomes, such as the elderly and the poor, who are the most vulnerable to increases in the price for basic necessities like electricity and heat,” Smith said. “More should be done to hold this administration accountable. We must cut regulatory red tape and put America back on a path to growth and prosperity."