4 billion pounds of toxic waste released into environment in 2014 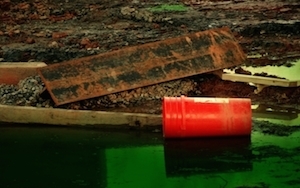 The agency emphasized that the majority of those contaminants were managed or contained in ways that were not likely to harm humans, though some of it was released into the air or into water.

The EPA said another 21 billion pounds of toxic waste was recycled, treated, or processed in some other way as to neutralize its impact on the environment. Overall disposal was down by 6 percent from 2013; and since 2003, air releases of toxic waste in particular have dropped by 55 percent.

"2016 marks the 30th anniversary of the Toxics Release Inventory, a program that has given people unprecedented access to information about what toxic chemicals are being used and released in their neighborhoods, and what companies are doing to prevent pollution,” EPA Chief Information Officer Ann Dunkin said. “TRI data continue to be an essential part of informed decision-making by citizens, communities, industries, and local governments.”

The report is compiled from data recorded by companies working in manufacturing, mining, electricity and other industries that general toxic waste. The companies are required by multiple laws to keep and submit their toxic waste and other waste management records to the EPA annually.

This year's report will be the first to have its own interactive website that lets users browse the report through searchable maps. The TRI report is available at www.epa.gov/trinationalanalysis.