New Mexico threatens to sue EPA over mine waste spill 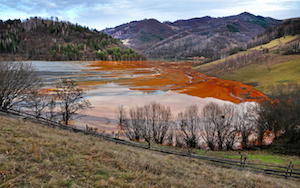 The New Mexico Environment Department announced this week that it is considering a lawsuit against the Environmental Protection Agency (EPA), the State of Colorado, and the owners of the Gold King and Sunnyside mines for damages related to a toxic waste spill that sent 3 million gallons of mine waste into the Animas River last year.

The state is required by law to give the EPA 90 days notice before officially filing its complaint.

“From the very beginning, the EPA failed to hold itself accountable in the same way that it would a private business," New Mexico Environment Department Cabinet Secretary Ryan Flynn said. "The EPA caused an unprecedented disaster that may affect our state for years to come. They must take responsibility."

The spill occurred on Aug. 5 of last year when the EPA was excavating part of the Gold King Mine as part of its own investigation of the mine. The EPA said digging created a leak of pressurized water above the mine tunnel that led into a creek connected to the Animas River, which provides drinking water for 130,000 people.

In response, the state ordered an investigation to explain the cause of the spill and how it was handled, as well as the EPA's role and the spill's effect on residents and the environment. The investigation is ongoing.

State officials said they would consider withholding the suit if the EPA agrees to clean up the spill area and commit to a long-term plan for monitoring the area.