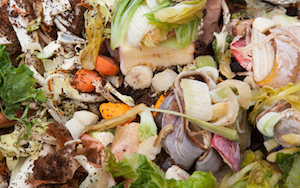 The grocery chain Price Chopper and Market 32 will dial up their efforts to prevent and reduce food waste, after signing on this week to the Environmental Protection Agency's (EPA) Food Recovery Challenge.

The program challenges major players in the food supply industry to implement systems for preventing food waste, distributing unsaleable but edible food to those in need, and composting whatever food waste is generated. In 2014, 800 challenge participants accounted for over 606,000 tons of diverted food waste.

“A staggering amount of edible food is wasted every day, winding up in landfills where it produces methane gas," EPA Regional Administrator Judith A. Enck said. "This uneaten food accounts for almost 25 percent of U.S. methane emissions. The EPA commends Price Chopper for committing to feeding people and not landfills.”

EPA research suggests Americans accounted for more than 37 million tons of food waste in 2013, accounting for more than one-fifth of the waste in landfills, the greatest percentage of any waste category. Within the home, American families throw out more than a third of the produce they purchase, even as 14.3 percent of U.S. homes suffered from food insecurity in 2013.

In signing on to the program, Price Chopper and Market 32 will create a process and list of goals for reducing its food waste, which it will submit to the EPA in February. In exchange, the agency will provide Price Chopper and Market 32 with resources to help the company track its waste and implement its initiatives. The company will submit a follow-up report in early 2017.

Having already composted nearly nearly 600 tons of food waste from 36 stores in 2015, Price Chopper and Market 32 are already off to a strong start.

“We believe that it’s our obligation as a food retailer with integrity, to ensure that the unsaleable fresh product we handle benefits our ecosystem in the best way possible,” Manager of Corporate Social Responsibility for Price Chopper and Market 32 Joseph Berman said. “Feeding hungry people in the communities around our stores and composting to minimize both carbon emissions and excess landfilling, continue to be priorities for us.”