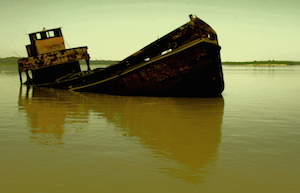 The Rhode Island Department of Environmental Management (DEM) recently awarded grants to the Town of Portsmouth and Westerly’s Watch Hill Fire District to support the communities’ efforts in cleaning up marine debris.

The grants, which total nearly $30,000, are funded by the state’s Derelict and Abandoned Vessel and Obstruction Removal Account, which was created in 2012. Portsmouth will use its $23,400 grant to remove a vessel that was abandoned off Blue Bill Cove. The Watch Hill Fire District will remove a vessel that was destroyed by fire from the Napatree Point Conservation shoreline, using $6,278 in funding from the DEM.

"Marine refuse and, in particular, abandoned vessels pose a significant threat to the health of our waters and the safe passage of boaters," DEM Director Janet Coit said. "Supporting efforts to remove obstructions is critical to the vitality of our waterways. We are pleased to be working with great partners in Portsmouth and Westerly to get these vessels safely removed for the benefit of boaters, wildlife, and valuable coastal habitats."