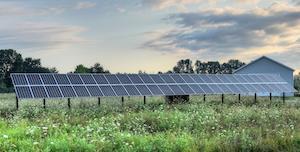 "This groundbreaking project will make it easier for federal agencies to use onsite renewable power while reducing greenhouse gas emissions and saving taxpayer dollars,” Federal Chief Sustainability Officer Christine Harada said. “This initiative is a great way to showcase how the federal government is leading by example and taking advantage of the incredible opportunities to build a clean energy economy, especially given the historic agreement in Paris."

The contract, awarded through a partnership of the U.S. General Services Administration (GSA), the U.S. Department of Energy (DOE), the U.S. Environmental Protection Agency (EPA) and the U.S. Forest Service, will see SolarCity source photovoltaic (PV) installation for small- and mid-size projects in the states, which will be operational by the end of 2016.

The initial term of the contract is for 10 years, with an option for another 10. It is estimated the federal government will save $5 million over 19 production years with this contract.

“The federal government is the single largest energy consumer in the nation and GSA, as its landlord and realtor, has a responsibility to lead by example in energy and sustainability,” GSA Chief Sustainability Officer Kevin Kampschroer said. “This strategic sourcing contract not only supports GSA’s commitment to greening the government, it also allows us to help create energy GSA will use at federal facilities.”