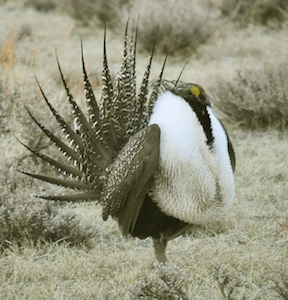 Greater Sage Grouse
The U.S. Department of Agriculture (USDA) is offering up to $40 million for the protection of sagebrush habitat on privately owned land, part of the department’s Sage Grouse Initiative 2.0 program.

Through the USDA’s Working Lands for Wildlife partnership, the department is working to promote conservation efforts for habitats that support seven focus species. The partnership encourages public and private investments into measures that will both preserve those species’ habitats and improve agricultural operations on the land.

“The decisions of agricultural producers have powerful impacts on wildlife and the long-term health of their own land, and the partnerships formed through our Working Lands for Wildlife initiative have had proven success for bringing back several of America’s native species,” Agriculture Secretary Tom Vilsack said. “By managing ranches with sage grouse and other wildlife in mind, producers also strengthen their own operations, boost resilience and increase agricultural yields.”

The partnership, which has seen 4.4 million acres become viable sagebrush habitat for sage grouse and 350 other species since 2010, has been successful in improving the sage grouse’s conservation status, as the species was removed from inclusion under the Endangered Species Act in September.

This round of funding is part of the $211 million put aside for the Sage Grouse Initiative 2.0’s next four years of operations.