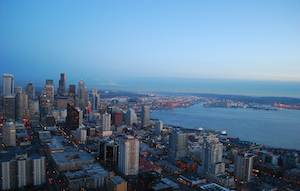 Port of Seattle
The Washington Department of Ecology (Ecology) last week proposed an environmental study of sediments sampled at the Port of Seattle’s Pier 91, which would coincide with an already scheduled project to maintain the pier’s depth.

The environmental study would be a continuation of an ongoing agreement between the port and Ecology, which was signed in 2012 through the authority of the state’s Model Toxics Control Act. Under its terms, the organizations are set to study 216 acres of the port, looking for contaminated portions of the site and to determine either cleanup alternatives or cleanup plans.

The terminal has previously served as a cargo facility, the site for oil company bulk fuel facilities, and a supply depot for the Navy.

The newly planned study would take advantage of a project, set for this winter, that will remove a shoal that has developed near Pier 91. The port is proposing to study the sediments it is removing for contamination at the same time.

Ecology is accepting public comments on the proposal until Jan. 5, 2016, which can be submitted by email or mail. Information about the proposed study can be found on the department’s website, at the Seattle Public Library’s Central and Magnolia branches, and at the department’s Northwest Regional Office in Bellevue.