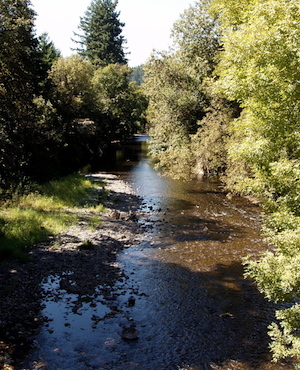 Calapooya River, Oregon
The Oregon Department of Environmental Quality (DEQ) is beginning work toward proposing new water quality standards for copper, which will be based on the Biotic Ligand Model rather than simply water hardness correction.

In January 2013, the Environmental Protection Agency (EPA) disapproved Oregon’s freshwater copper standards, set out in the Oregon Administrative Rules 340-041-0033 and -8033. The DEQ is taking steps to propose amendments to those rules so that the state’s copper standards will be in line with the EPA’s 2007 recommendations.

In 2007, the EPA suggested standards based on the Biotic Ligand Model, which determines site-specific water quality characteristics using 11 parameters that together impact freshwater bioavailability and the toxicity of copper. The DEQ’s current copper standards are based only on water hardness, and many studies point to the Biotic Ligand Model as a more accurate predictor of copper toxicity.

As part of its process to amend the current water quality standards for copper, the DEQ appointed an advisory committee that will begin meeting in late December. The members will provide their expertise to issues like technical and policy considerations and the amendments’ potential fiscal impact. While the public is invited to attend the meetings, on December 17, January 27, February  25 and April 6, the meetings are closed to public participation.