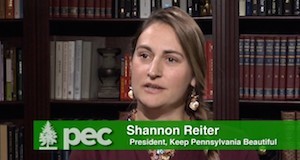 While the state has worked to increase recycling rates and decrease municipal waste, the state is still home to 6,500 illegal dumping sites that impact its environment and economy. Reiter, whose organization is an affiliate of the national Keep America Beautiful, Inc., was joined on the show by other state environmental authorities. Former Pennsylvania Department of Environmental Protection (DEP) Secretary and current Keep Pennsylvania Beautiful board member David Hess led a roundtable discussion with Keep York Beautiful Executive Director Tom Smith and PEC Vice President Janet Sweeney.

The show, which aired on November 15, covered the causes of illegal dumping and the ways in which the state is working to reduce it, including increased access to trash disposal. This episode’s guests also discussed the need for reducing illegal dumping, highlighting its costs within Pennsylvania.