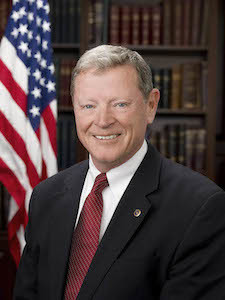 “Over the past 25 years, our nation has made great strides in improving our environment as a result of the bipartisan 1990 Clean Air Act amendments,” Inhofe said. “As a result of this law, Americans are breathing the cleanest air in several decades and we continue to make progress in reducing pollutants.”

The amendments were signed into law by President George H.W. Bush on Nov. 15, 1990 after receiving bipartisan support in Congress. They updated the Clean Air Act to include measures about problems such acid rain, urban air pollution and ozone depletion.

“These environmental advancements have even simultaneously taken place while our nation has increased its use of energy consumption by 47 percent, population has grown by 53 percent, and economic development has improved by 219 percent,” Inhofe said. “As an original co-sponsor, I can say first hand that these accomplishments were achievable because of a collaborative effort between Congress and the Bush administration who worked tirelessly together to find bipartisan solutions that would safeguard Americans’ health and environment while also continuing to encourage our nation’s economic advancement.”