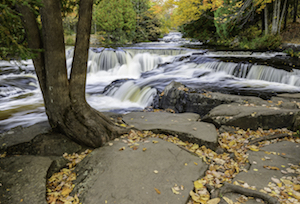 Commonly known as rock snot or didymo, didymosphenia geminata is a freshwater alga that looks like wet wool. It can affect food sources for aquatic life and make water sources unsuitable for recreational activities. New Zealand mud snails, which have no natural predators or parasites in the U.S., can overtake water sources, and lead to a decline in native snails and insects. This in turn affects the food chain for the fish that feed on the native populations.

Someone visiting with infested gear most likely introduced the species from other locations. The MDNR is trying to limit the spread of the species.

"The DNR and DEQ have also been actively working with regional partners on increasing awareness on how to prevent further spread of both of these invasive species," Herbst said. "For example, the DNR and DEQ have developed and posted signage at local access on the Pere Marquette (PM) River near locations of known establishments. In addition, we have also been working with local partners such as the Pere Marquette Lodge and Baldwin Bait and Tackle to construct and maintain wader washing stations to help prevent further spread, and we have also provided outreach materials to these shops to inform their clients about steps for preventing the spread.”

Negative affects from the snails and didymo will depend on how quickly their populations grow. The MDNR believes they currently remain at local scales and low densities.

“Didymo will likely die off slightly during the winter months and potentially bloom again next year, similar to other alga in (Michigan)," Herbst said. "There are still a lot of unknowns related to the environmental conditions that promote nuisance blooms of Didymo. The New Zealand mud snails will likely go dormant over the winter, but remain in the river’s bottom substrate and continue to proliferate next year."

The infestations reinforce the importance of cleaning recreational equipment between uses.

Didymo and New Zealand mud snails can attach to fishing gear, waders, boat propellers and other hard surfaces. The MDNR recommends that all anglers and boaters properly clean, drain and dry all equipment between uses to avoid spreading these and other invasive species.