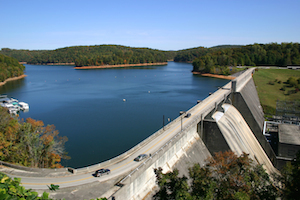 The Tennessee Valley Authority (TVA) currently has no plans to alter its reservoir operating guides, despite requests from local residents and a federal lawmaker that had to be weighed against the needs of millions of people in the region.

“This is not being done to penalize anyone, but rather it’s being done to ensure the safety of everyone,” Jim Hopson, TVA manager of public relations, told EP News Wire.

The Knoxville-based TVA, a federally owned corporation serving 9 million people living in parts of seven Southeastern states, was created by congressional charter in 1933 to provide navigation, generate electricity, manufacture fertilizer, act as an economic development agency and control flooding in the Tennessee Valley.

“Flood mitigation continues to be one of our main concerns,” Hopson said.

Typically, the hurricane season begins in May and runs through the end of November. The flood season in the Tennessee Valley is from December through early May. The Blue Ridge, Notedly and Chatuge reservoirs handle most of the work reducing potential flooding from hurricanes, and the TVA starts drawing them down in August when there’s an increased risk of late-season hurricanes. Current TVA guidelines specifically call for Blue Ridge Lake to be below full volume for much of the year, including part of the summer.

But that doesn’t work for U.S. Rep. Doug Collins (R-Ga.) or members of the Lake Blue Ridge Civic Association, who complained that the schedule shortens the recreational season for boating, swimming and other activities that could pull in tourism, improve economic growth and decrease a 10 percent unemployment rate. Earlier this year, in fact, Collins sent a letter to TVA asking for changes to the annual drawdown of water in the lake based on recommendations from the association.

“The TVA appreciates the congressman’s and the residents’ points of view and completely understands their concerns,” Hopson said. “We certainly understand where they’re coming from. However, at this time, we have no plan to change the operating guide for the Blue Ridge Reservoir or for any of our reservoirs,” Hopson said, referring to the reservoir-specific flood guides, which state the amount of flood storage that must be reserved during different times of the year.

The guides are based on historical rainfall records, as well as decades of operating experience that has proven them to be the safest way to manage the reservoirs for flood control, he said.

And while the TVA “fully respects” their contention that the economic benefits would increase along with lake levels that were higher for longer, the authority must balance those needs with the needs of everyone along the entire river system, Hopson told EP News Wire.

For instance, farmers who are downstream from the Blue Ridge reservoir have petitioned TVA to lower the water levels even faster, he said, to increase flood storage capacity that could protect their agricultural businesses.

“This is also a valid economic issue and these are competing interests,” Hopson said. “But we have to look at the interests of all 9 million people served by the TVA.”

It’s a sensitive issue, he added. “But we can’t sacrifice safety … purely for recreational purposes.”