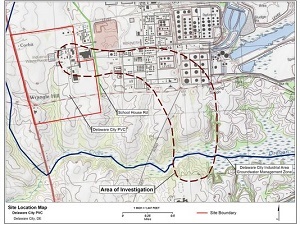 The U.S. Environmental Protection Agency (EPA) recently launched an investigation into the nature and severity of the groundwater contamination at the Delaware City PVC Superfund site in New Castle County, Pennsylvania.

The investigation will be conducted by Bayer CropScience L.P. as part of an administrative settlement with the EPA. It will encompass the groundwater contamination in the shallow aquifer east of the PVC plant property as well as the evaluation of possible contamination in the deeper aquifer.

Although the site was previously investigated, these areas were not explored The first investigation and subsequent clean-up work were done by personnel from Stauffer Chemical Co. Bayer CropScience is the successor to Stauffer.

The PVC site was added to the EPA's National Priorities List of most contaminated sites in 1983. The property is where Stauffer ran a PVC manufacturing plant for approximately 15 years, beginning in 1966 when the plant was built.

For the disposal of PVC waste and sludge, Stauffer used earthen lagoons and pits. As a result, the groundwater from the site, which was used for drinking and agriculture, was severely contaminated with the plant's solvent chemicals.

Stauffer commenced clean-up at the site in 1982, using a pump-and-treat system that still operates. While this solved the problem of contamination in the uppermost aquifer near the plant, it did not assess the contamination to the east of the plant or in the deeper aquifer.

Formosa Plastics Corp. has been operating the property since 1981.