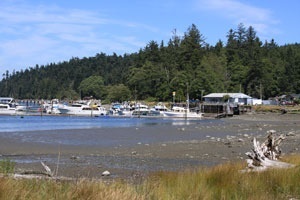 The site, 1.1 acres at 200 Cornet Bay Road, was cleaned up in 2014. After that, the groundwater at the site was monitored for a year. Officials have determined the site is now in keeping with state standards for public health and environment protection.

Clean-up efforts at the site included:
- Installation of a 360-foot steel bulkhead wall adjacent to a timber bulkhead.
- Excavation of about 23,000 tons of petroleum contaminated soil for disposal and the placement of clean soil to backfill the area.
- Temporary relocation of the marina’s small store to state park property next door during cleanup.
- Removal of petroleum contaminated soil from a small wetland and re-grading of area to create additional aquatic habitat.
- Collection of soil and groundwater samples for a year.

The clean-up cost $4.2 million and was funded through a cost-sharing plan as part of a 1993 legal agreement with the property owner.

Public comment will be taken through Nov. 9 before the site is officially taken off the Hazardous Sites List. Comments and technical questions should be sent to Jing Liu, site manager, Department of Ecology, 3190 160th Ave. SE, Bellevue WA 98008 or emailed to Jing.Liu@ecy.wa.gov.