Senators rally around Lautenberg Chemical Safety Act ahead of vote 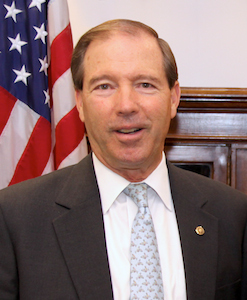 The bill, which would overhaul the Toxic Substances Control Act of 1976, requires the Environmental Protection Agency (EPA) to only consider health and safety impacts when assessing a chemical's safety and puts a larger share of the evaluation costs on chemical companies, among other measures. It is based on a bill developed by Vitter and late Sen. Frank Lautenberg (D-NJ), whose widow also supports the bill. The late senator worked for years to improve the 1976 law, which only managed to regulate some of the 60,000 chemicals targeted by the original law. The EPA's ability to wield the law was weakened in 1991, when a court struck down the EPA’s proposed ban of asbestos, a known carcinogen.

“With about 1,000 new chemicals coming on the market each year, 39 years is too long to go without protections for children and families,” Udall said. “As we prepare to begin debate on the Senate floor, I encourage all lawmakers to support this bill to ensure families, young children, pregnant women and chemical workers are safe from dangerous substances.”

“I know that the late Senator Frank Lautenberg would be beyond delighted to see his legacy reach the floor of the U.S. Senate, especially with such overwhelming bipartisan support from 60 co-sponsors representing 38 states,” Vitter said. “Senator Tom Udall and I have worked tirelessly to preserve Frank’s legacy. After countless meetings and negotiations with stakeholders, affected communities and experts from all sides of the political spectrum, we have created a solid, comprehensive and common-sense bill.”