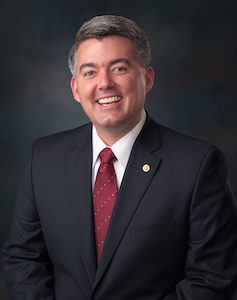 “The LWCF is one of the most critical tools we have for protecting our nation’s natural treasures," Gardner said. “Its permanent reauthorization is supported by sportsmen, hunters and many other Coloradans who appreciate the outdoors. It’s a responsible fiscal partnership and provides countless benefits.”

Gardner has shown previous support for making the LWCF’s reauthorization permanent, voting affirmatively on a measure that would have done so in January. That vote did not pass, but Gardner also has supported an item in the bipartisan energy bill that would accomplish the goal, which was advanced out of the Energy and Natural Resources Committee.

“I’ve supported making the LWCF’s authorization permanent throughout my time in the Senate, and I will continue to work toward making that goal a reality,” Gardner said. “I’m proud to join this letter and will continue to press Senate leadership for a permanent solution to responsibly funding the preservation of public lands.”

Gardner is a fifth-generation Coloradan who was born and raised in Yuma, a small town on the Eastern Plains of Colorado, where his family has owned a farm-implement dealership for nearly a century. Gardner lives in the same house where his great-grandparents lived. After working at his family's implement business and the National Corn Growers Association, Cory took a position as a legislative assistant for former U.S. Sen. Wayne Allard (R-CO) and quickly advanced to become his legislative director.

Gardner began serving in the Colorado House in 2005, where he spent time as the minority whip and became known for his expertise in natural resource and agriculture policy. Gardner was elected to the U.S. House in 2010. As a member of the House Energy and Commerce Committee, Cory championed an all-of-the-above energy strategy that promoted traditional resources as well as renewable energy. Gardner also founded a bipartisan energy efficiency caucus in the House. In the Senate, Gardner continues to pursue energy policy as a member of the Senate Energy & Natural Resource Committee.