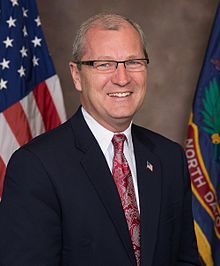 “We would not be at this point without the hard work and leadership of NRCS Chief Jason Weller and director of the North Dakota Game and Fish Department, Terry Steinwand,” Cramer said. “Their willingness to listen to opposing views and commitment to finding a workable solution to this issue were essential to getting all interested parties to ultimately sign off on this agreement.”

“This agreement addresses the appearance of bias concerns raised by farmers and ranchers while ensuring conservation efforts continue throughout North Dakota,” Cramer said. “NDASCD’s willingness to step up to the plate and assume the management role for this biologist program is a testament to its commitment to North Dakota. This ensures a neutral third party manages this program and works in partnership with farmers and ranchers.”