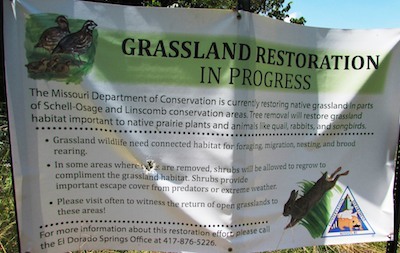 This effort aims to make the habitat more welcoming to wildlife, including quail, rabbits and grassland songbirds. The grassland restoration is also important in terms of attracting pollinators, such as monarch butterflies and native bees. Many species native to prairie land require a connected habitat for foraging, migration, nesting and rearing.

In addition to removing trees, contractors will be removing invasive plant species with  herbicides. They also will be planting some species native to the area and allowing some shrubs to re-grow in some areas, which will protect wildlife from predators and extreme weather.

The Schell-Osage grassland-restoration project will not affect the entire area, which occupies 8,633 acres. The MDC encourages the public to continue visiting the acreage and apologizes for any inconvenience from the restoration project.