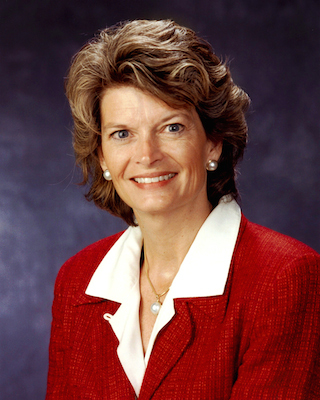 Sen. Lisa Murkowski (R-AK)
The Alaskan Republican Party issued a statement on Thursday in response to the Senate Committee on Appropriations' passing of the Fiscal Year 2016 Interior, Environment and Related Agencies Appropriations bill, which takes several measures to prevent the Environmental Protection Agency (EPA) from implementing proposed and finalized rules.

“This is a huge win for Alaska,” Party Chairman Peter S. Goldberg said. “Not only are fire suppression funds in this bill, but Alaska’s U.S. Sen. Lisa Murkowski has essentially checkmated the EPA from enacting its ‘Waters of the United States Rule,’ which it had enacted to grab jurisdiction over nearly all waters, including puddles and ponds on private property. The rule would have impacted Alaska more than any other state, and it infringed on Alaskans’ property rights.”

The bill cuts the EPA’s funding by nearly $539 million and includes measures like a prohibition on federal plans being forced on non-supportive states and prohibiting a change to the current ozone standard until it more counties come into compliance.

“Sen. Murkowski has our congratulations," Goldberg said. "Through her strong role in the budget process, she blocked the EPA from forcing federal plans on states regarding greenhouse gas regulations and put several other funding restrictions in place to keep this agency in check."