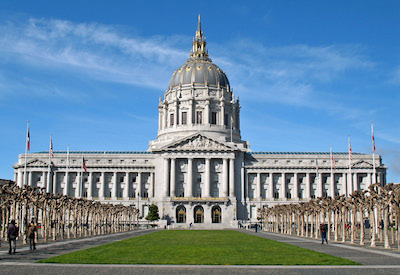 The designation is the council's highest energy and environmental design rating.

“San Francisco has long been a leader and innovator at the forefront of solutions to combat climate change, and reduce energy and water consumption,” McCarthy said. “As the entire nation watches California endure its fourth year of drought, we all must do our part to use renewable energy, be energy efficient and conserve our precious water resources.”

San Francisco’s City Hall was built in 1915. It received its rating in the Existing Building Operations and Maintenance (LEED - EBOM) category. The building’s status came after joint efforts by the San Francisco Public Utilities Commission, the City Administrator’s Office and the EPA, which provided a $700,000 grant to upgrade the toilets and urinals to high-efficiency models. Toilets and urinals at other city civic buildings also are being upgraded.