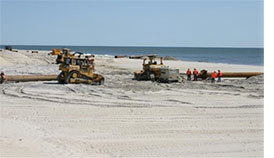 The projects will take place over 12.7 miles of beaches in Long Beach Township, Ship Bottom, Beach Haven and part of Surf City. They will finish storm-damage reduction projects that were being constructed before Sandy hit in October 2012.

“This is a tremendous day for residents of Long Beach Island (LBI) and for everyone who loves to visit and vacation here,” New Jersey Department of Environmental Protection Commissioner Bob Martin said at a ceremony with other officials in Ship Bottom. “This project is a great example of the type of teamwork needed at all levels of government as Governor Christie continues his commitment to a statewide coastal protection system to defend our economically vital shore communities.”

The contract to complete the initial construction on LBI is funded 100 percent by the federal government under the Sandy Relief Act.

All of the projects are expected to be completed by April 2016.