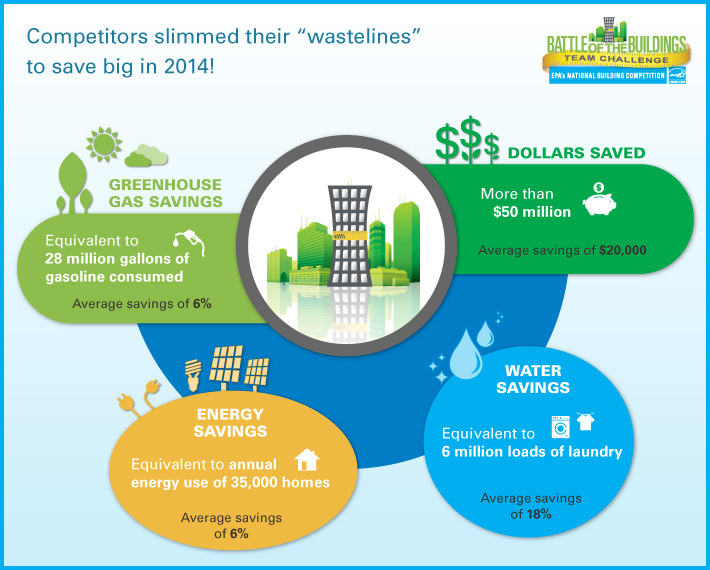 The Environmental Protection Agency´s fifth-annual Energy Star Battle of the Buildings competition generated $50 million in savings and prevented 250,000 metric tons of greenhouse gas (GHG) emissions among the more than 5,000 buildings across the United States and Puerto Rico.

This year’s theme, “Team Challenge,” featured teams from five or more buildings who worked together to reduce their total energy use as much as possible over the year. In addition to savings and GHG reductions, competitors cut their energy use by more than two billion kBtus (thousand British thermal units) and reduced their energy use an average of 6 percent, equivalent to an average savings of nearly $20,000 per building.

“EPA's Energy Star Battle of the Buildings competition brings together communities to find important solutions to reduce harmful carbon pollution fueling climate change, save energy, and significantly reduce energy costs in the places where we work, play, and learn,” EPA Administrator Gina McCarthy said. “It's great to see the collaboration and hard work the competition inspires to accomplish energy-efficiency measures that will continue to benefit these communities for years to come."

A Woodville, Alabama, building team, “Going Blue for Woodville,” was named 2015's Top Team for cutting its average energy use by 25 percent. The agency also recognized the 2015 Top Building, the Woodville Chapel, for an energy reduction of 68.4 percent.